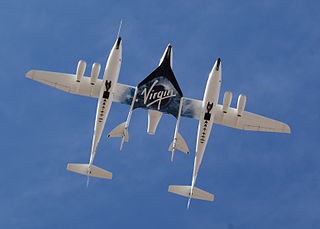 Sir Richard Branson. Astronaut. The words of former International Space Station commander Chris Hadfield, as he pinned astronaut wings on the eccentric billionaire’s lapel today. Branson, ever the showman, was reveling with the crew of SpaceShipTwo, having returned safely to Earth after a brief sub-orbital journey to the edge of space. The occasion represented the culmination of 17 years of toil by commercial spaceflight company Virgin Galactic in its quest to offer the experience of a lifetime to paying customers.

Branson founded the company in 2004, working closely with well known aeronautical engineer Burt Rutan in pursuing the goal of developing a novel means of launching a small commercial spacecraft capable of operating space tourism flights. Known for his radical aircraft designs, Rutan’s creative influence on the evolution of both the mothership and spacecraft is obvious. Despite the tragic loss of one spacecraft and a crew member during testing in 2014, the remarkable design remains a marvel of engineering and today’s milestone is a testament to the work of many scientists, engineers and the visionary founders in bringing the project to fruition.

The Virgin Galactic operation is based at the purpose built Spaceport America near the (appropriately named) town of Truth or Consequences, New Mexico. The company is not the only resident at the spaceport. It is also home to HAPSMobile that is developing an unmanned aerial vehicle (UAV) as a telecommunications platform, a project with similar aspirations to ThincLab Growth Programme company Kea Aerospace. A number of other startup aerospace ventures are also based there, illustrating how taking an ecosystem-building approach can create economic benefits. Spaceport companies have received vast amounts of investment from some of Silicon Valley’s most influential venture capital firms.

The economic return on investing in terrestrial infrastructure for aerospace ventures must certainly not be lost on the backers of our own future space base here in Canterbury, including award winning economic development agency ChristchurchNZ through promoting an Aerospace Supernode strategy and the cluster building efforts of Aerospace Christchurch. Project Tāwhaki, if executed in a timely fashion, could also attract startups and substantial amounts of capital into the region. Spaceport and the success of Virgin Galactic demonstrates that anything is possible.

Is your company an aerospace or future deep tech growth story?

Contact us to find out how Canterbury’s founder led tech incubator based at the University of Canterbury Business School can help you go further.