Top of the Tables

Flatmates Guido Loeffler and Nick Lee needed a new dining table during the 2020 lockdown. So with plenty of time on their hands, they set about building one for themselves in the backyard as a challenge. Their friends were all highly impressed and the idea for a business began to coalesce. Fast forward a year and the pair have a small manufacturing facility up and running in Sydenham, Christchurch and high quality tables and other furnishings are flying out the door as quick as they can be assembled. 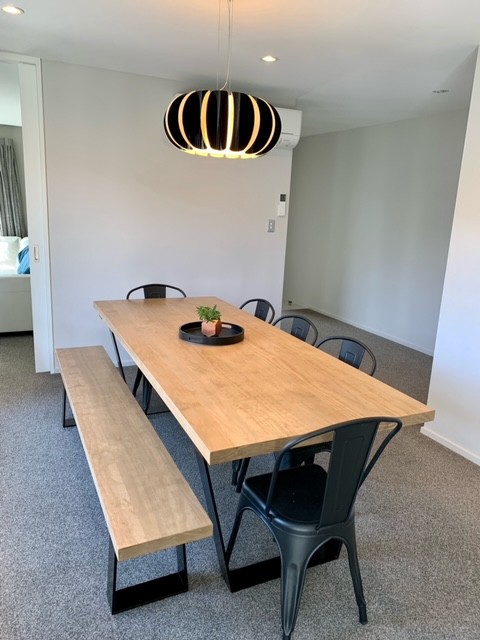 The pair initially launched by posting a couple of their early products on both TradeMe and the popular “New Zealand Made” Facebook page. With housebound Kiwis contemplating their home décor a lot more, orders went through the roof and the lads have been flat out ever since.
Now Innate Furniture has their own website where customers can purchase direct. With contracts secured to handle commercial fit-outs as well, the company has already grown to include three additional employees and there are plans afoot to extend the workshop facility into an adjoining commercial space.

As global supply chains have been disrupted and with increasing concerns being raised about the sustainability credentials of many imported lines of furniture, it seems like the company “nailed” a sweet spot at precisely the right moment in time. The company founders explain that sustainability and good environmental stewardship is at the heart of everything they do. For example, much of the timber used in the products is sourced sustainably from West Coast beech forests near to where Nick Lee grew up. Iron brackets are locally forged wherever possible and the final timber treatments are provided by a Nelson based supplier that uses only natural compounds to provide a sweet smelling and glossy finish to the end product.

A diversity of skillsets seems to have played a big part in the success of the business so far. Nick Lee, who began training as a builder when he left school, knows his way around a bandsaw and tool-belt. Loeffler is a University of Canterbury graduate in international business and also has one or two previous ventures in his recent past. Additionally, mentors from the Ngāi Tahu business world have been hugely valuable in assisting with advice and network connections, say the founder friends. The pair also acknowledge that advisory provided by ThincLab at the UC Centre for Entrepreneurship has been pivotal in developing their strategic thinking around growth of the business.

With a large proportion of household furnishings currently imported into New Zealand, so the homegrown and all natural positioning of the product has been a powerful differentiator, says Guido Loeffler. So much so that the company has recently been approached by a major retail outlet looking to distribute. The future looks bright for a Canterbury startup that is fast becoming a trend setter in the area of sustainable and scalable business.

Innate Furniture is part of ThincLab’s Growth Programme which provides tailored advisory to emerging ventures in science, technology and transformative manufacturing with the support of ChristchurchNZ and Callaghan Innovation.