A Taste For Science 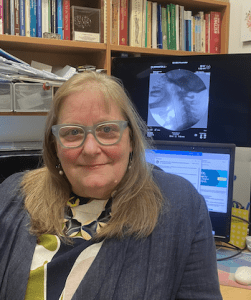 Belonging to a military family in the United States meant growing up in dozens of different locations for Maggie-Lee Huckabee. But arriving in New Zealand at the turn of the millennium to take up an academic post at the University of Canterbury must have seemed like an entirely new beginning altogether. Two decades down the track, canine pets and an aquarium full of fish are testament that Professor Huckabee has finally settled. That’s fortunate for us. Huckabee has become one of the world’s leading authorities on post-stroke recovery and wants to share that knowledge with clinicians globally.

Maggie-Lee started her career by training as a teacher in Texas, but her burning curiosity about everything soon got the better of her. So she signed up for a course on speech language pathology. Then a life-changing event led her down an even more intriguing path. Suffering a head injury during a summer stint as a white-water rafting instructor, opened the door to learning about and ultimately practicing in the area of recovery from brain trauma. This in turn led to her eventually completing a PhD in speech language pathology at the University of Memphis.

Now as the director of the University of Canterbury Rose Centre for Stroke Recovery, Professor Huckabee has a busy teaching schedule, a bunch of post-grads to supervise and a steady stream of clinical work with stroke patients to oversee. Brain damage manifests itself in many ways. One of the biggest success stories at the clinic has involved practical applications of her research into assisting stroke patients in re-learning how to swallow. So Maggie-Lee founded Swallowing Technologies as a University of Canterbury spin-off company, with the aim of commercialising her technology and making it available to clinicians working in the field of stroke recovery.

The ability to swallow seems like such a fundamental reflexive action, that we generally take it for granted. But imagine the horror of losing that ability as a result of a stroke or brain injury. Professor Huckabee developed a world class methodology for treating such cases and is now turning it into a software tool that assists clinicians in the analysis and treatment of dysphagia, or swallowing impairment. Apart from restoring the sublime ability to receive food and drink orally, the therapy also reduces public health costs due to the worryingly high number of patient readmissions that occur as a result of choking or lung infection.

It’s no surprise that Maggie-Lee has received numerous accolades for her work, including a nomination for New Zealander of the Year in the field of innovation and a recently awarded MacDiarmid Medal from the Royal Society of New Zealand. Consequently the growing list of supporters for Swallowing Technologies’ seed round already looks impressive. Prof. Huckabee admits she has been on a steep learning curve on the business side of healthtech. But she attributes her progress to having good advisors and patient investors around her. She is also a huge believer in pursuing translational research that can ultimately help people, as well as generate a commercial return.